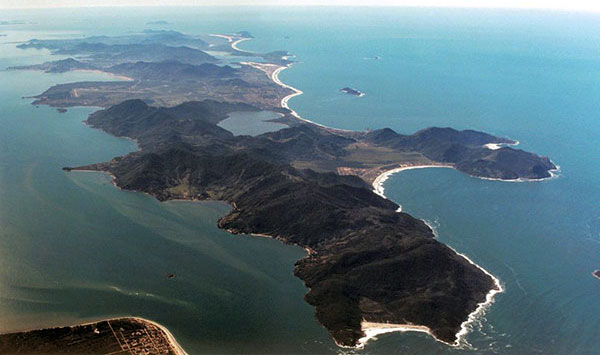 Florianopolis (Portuguese: Florianópolis) is the capital of the southern Brazilian state of Santa Catarina and it is commonly called FLORIPA.

The city is located on Santa Catarina Island (see the map), with only a small part on the mainland. Two bridges link the island to the mainland, but at the present moment the Hercílio Luz Bridge, a landmark of the city, is closed for repairs. It is planned to open in the future for pedestrians and cyclists.

Over the years Floripa has become one of the most popular destinations in Brazil, for those who are looking for superb beaches, beautiful scenery, interesting culture and friendly people. It has also experienced a real estate boom with the Brazilians, especially from the states of São Paulo and Rio Grande do Sul, looking for a better quality of life away from the chaos of big cities. It currently (2016) has an estimated population of 477,798 people, with the metropolitan area reaching 1,111,702

The northern beach resorts Jurerê, Daniela, Canasvieiras, Brava and Ingleses get very busy during the summer and there are plenty of hotels, restaurants and other conveniences for the tourist.

Eastern beaches, like Joaquina, Mole and Moçambique are among the best surfing beaches and popular with young people. Beaches heading south include Campeche, Armação and Morro das Pedras, which are all very beautiful and also good for surfing. Isolated and unspoiled beaches, like Lagoinha do Leste and Naufragados can be found at the southern end of the island and can only be reached by trail or boat. (See Beaches page for more info)

The Lagoa da Conceição lagoon is a famous natural attraction, and the centerpiece of the island - sports, cuisine and entertainment are first class! The lagoon is relatively shallow, with high winds making it a world-class location for windsurfing.

Carijós Indians of the nation Tupi-Guarani were the first inhabitants of Florianópolis area. Around 1514 the Portuguese landed and gave the area the name Ilha dos Patos, but this name was supplanted by the Spanish people who noticed the indifference of Portugal towards the area, decided to invest in the conquest of the South Atlantic and in 1526 they renamed the place calling it Santa Catarina Island.

The official settlement of the island began in 1673 with the arrival of the member of Bandeiras Francisco Dias Velho agricultural company and it continued in 1678 with the construction of a chapel consecrated Nossa Senhora do Desterro. At that moment a villa began to take form, slowly acquiring a colonial aspect.

To guarantee its domain the Portuguese Crown elevated Santa Catarina Island to the category of town in 1726. From this date on Vila do Desterro and mainly the port began to have strategic function because it was situated halfway between Rio de Janeiro and Buenos Aires. For this reason in 1738 the Capitania da Ilha de Santa Catarina was created and the most expressive seaside defensive group of the southern Brazil. 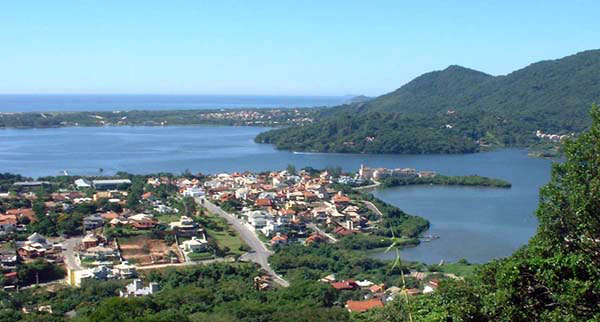 With the coming of the Captaincy the population began to grow, but the great population growth happened between 1747 and 1756 with the arrival of about 6.000 settlers coming from the Archipelago of Açores and from Ilha da Madeira. In 1823, still in the monarchic period, Desterro became the Capital of Santa Catarina Province opening a prosperity period with many urban works and also with an intense political organization.

Regional elites not happy with the government centralization deflagrated Revolta Federalista in the beginning of the Brazilian Republic. The movement that started in Rio Grande do Sul spread to Santa Catarina and turned Desterro into the Federalist Capital of the Republic. The then president of Brazil, Marechal Floriano Peixoto, known as Iron Marshal, quelled the rebellion and ordered shot a lot of people who were considered enemies, in the Anhatomirim Island Fortress. To show loyalty to the marshal it was approved in 1894, the change of the name of the capital of the State, which passed from Desterro to Florianópolis, that is to say, city of Floriano.

The tradition of the Azorean craft is appreciated in "rendas de bilro", "tramóias", "tear" tapestries and in the making of wakes, baskets and cages. Dishes made of fish, mollusks and crustaceans enrich the cookery of the island and of the continent.

In the dances and merriment, the most alive examples of that tradition are present in the "Dança de Pau de Fita" and in the "folguedo do boi de mamão". The literature got enriched by the small poems, the "pão-por-Deus", the proverbs, the tunes and legends.

We cannot also forget about the oral language, a feature of the "florianopolitano" people and which is characterized by a sung sound and by a high-speed speech. 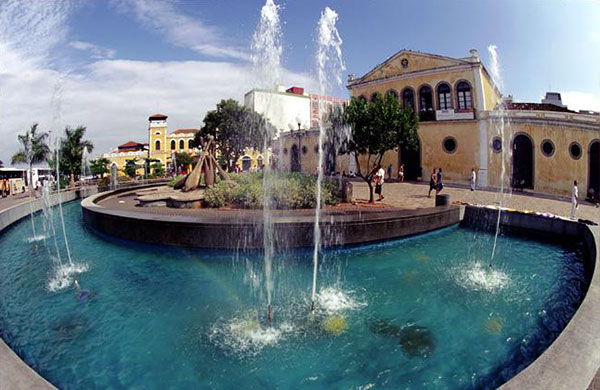 Santa Catarina's Island has an awsome biodiversity and of very easy access. It is a rich outdoor geography class.

It is possible to walk by the mangroves that work as nursery and food source for several species of animals, or to see environments of Atlantic Forest in its countless islands.

The vegetation of Santa Catarina Island is constituted by implanted pasture, pioneer secondary vegetation, brushwood (around 50% of the current vegetation), secondary forest and primary forest (around 2 to 3% of the vegetation area).

In the aquatic environment there are mollusks (mussels and oysters), crustaceans (crab and shrimp), fish (mullets, "robalo", halibuts, "manjuba", "congrio"). There are also the mammals in these sets, as the otters, dolphins and whales and the reptiles as alligator of yellow crop.

In the terrestrial environment there are more than 30 species of lizards and snakes, such as "jararaca", "jararacuçu" and "coral", not to mention the mammals highlighted in the opossum species, bats, "macaco-prego", coon and others.

Regarding birds, there are approximately 170 species on the island, with prominence for Martim Pescador Verde, bird symbol of Florianópolis. 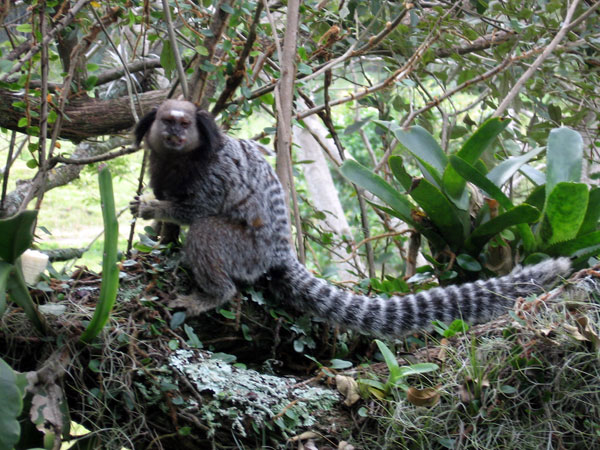 Florianópolis presents climatic characteristics common to the Brazilian Southern Coast, with well defined seasons. The climate is humid mesothermal with significant precipitation that is well distributed during the whole year. It does not exclude the possibility of torrential rains in the summer and winter rains accompanied by the famous South Wind of Floripa. 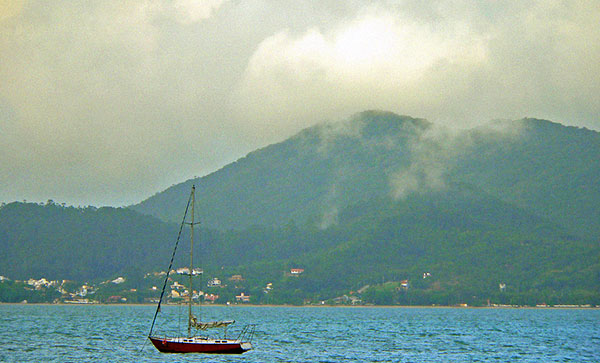 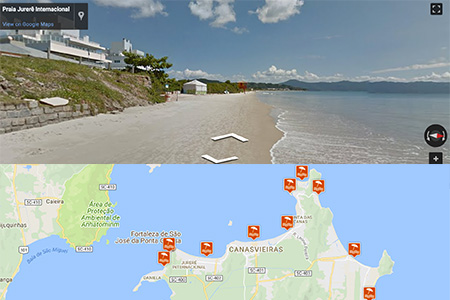 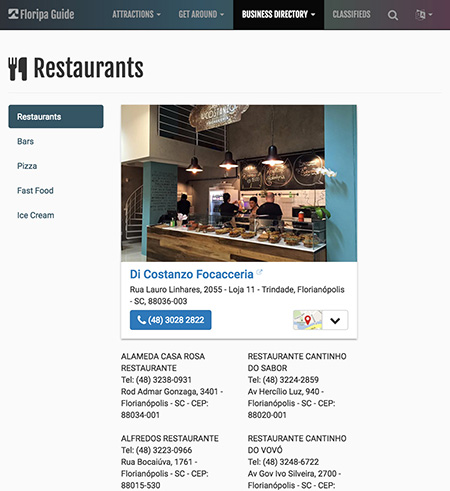